Jack and the Beanstalk in Review 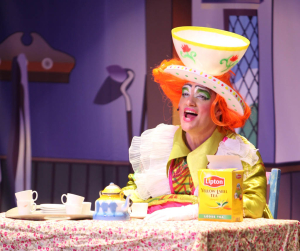 “There is nothing quite like the magic of pantomime. It is a peculiar artform that has evolved over a few hundred years to become something that the British (mainly) associate with Christmas time, and family fun. In Kuwait the tradition has now been adopted by many in the expat community as it also signifies the end of term and an impending travel date to get home and see the family for a break. 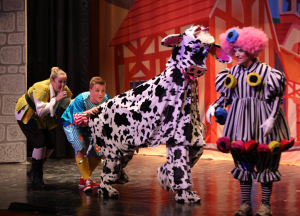 This year, the threat of no Kuwait pantomime spurred the SIK team into action and, though they only ended their previous production mid November, they somehow managed to pull out all the stops to stage a full scale, spectacular panto full of colour and magic in little more than a month.

The new venue, The Performing Arts Centre at The English School in Salmiya, is an impressive hall with excellent tiered seating. As I took my seat on for the final afternoon performance I was surrounded by a hubbub of  excitement from over four hundred other eager audience members clearly pumped up and ready to shout and scream – something we quickly all took to as the lights came up. 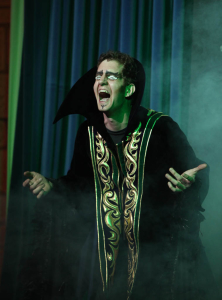 From the opening moments as Gristle (Brad Manker) appeared in a swirl of smoke the atmosphere was set. His performance and costume befit of any professional production, as too was the wonderful Fairy (Helen Towler-Williams) who irked him at every turn.

From gold and glitter to colour and spectacle, the curtains opened to a beautiful, bright village set onto which bounded Simon (Andrew Batty) with a hugely enjoyable and energetic performance.  Stephen Grimes as Dame Dribble brought a lovely blend of child’s humour with a good few jokes that bounced off the kids’ heads and kept us adults entertained, (“I’m just pleased to see you”) continuing the great panto tradition of well placed innuendo. His/Her wild array of wacky costumes and hair pieces also lit up the stage and for the most part stayed on – always a challenge for any dame.

Jemma Standen and Fiona Nelson as Jack and Jill, provided strong principal duo roles, both singing superbly and playing the perfect ‘straight’ character parts to the pantomime madness around them. Daisy the cow, a painful role for any actor (here played by Mike Blackburn and Lisa Bidnall-Bowdery), also added some touching and humorous moments and was clearly loved by the kids around me. 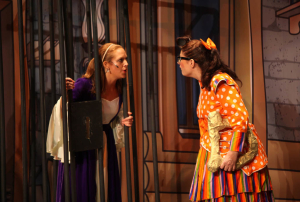 Peter Clark delivered a fun, bumbling Mayor Muggle and the surprisingly short Giant, played by Alison Kent, brought another unexpected smile to my face as she scampered to the front of the stage appearing about 3 feet high and pointedly snarled at the audience, “What? Never seen a Giant before?”  It was Sharon Williams as Fiona who took my award for favourite cameo performance though, with a lisping caricature of a girl who just oozed joy.

All in all this was as good a panto as any I have seen. Colourful sets and costumes, energetic chorus dancing and singing and eight of the cutest kids you could ever imagine giving it their all up on the stage as the kids chorus. All the panto elements were there, much to shout about, water guns, messy cooking and a much enjoyed audience sing a-long to end the show.

A very well deserved round of applause to SIK for continuing this wonderful Christmas tradition and ensuring that Kuwait had its own pantomime this year. The cast and crew clearly all worked very hard to stage an engaging 2 and a half hour show, but the results spoke for themselves. As someone wrote on the group’s Facebook page today, “I never thought my four year old would sit that long but she was completely absorbed and wanted to watch it all again! Well done to you all , you did an amazing job. Thank you very much.” That pretty much says it all.